Finishing my new CD has taken me a loooong time, but that’s ok because I have managed to use the best CD Keys. I’m not really in a hurry and I’m not expecting on getting rich (or any money) from doing it anyways. Having had all this time and keeping in mind that I want to at least break even with the investment, I’ve discovered some good inexpensive resources for publishing my music online, on CD and on paid digital retailers like iTunes and Amazon.

When first making CD’s on the cheap, I made them myself burning them by printing the covers and CD art and buying the jewel cases. This was relatively inexpensive, but it took a lot of time and it was very prone to error. A short run of CD’s with the regular guys takes a harsh initial investment. On average, is about $200 for 100 CDs. Then I started looking for self publishing options which allow you to order as few copies as needed. Lulu, a one-stop self publishing option for many different types of media can get CD’s manufactured for as low as $4.50. CreateSpace an Amazon company has a similar approach.

Then, and I found Kunaki. Kunaki is a service that specializes on one thing: On-demand duplication of CD’s and DVD’s. You don’t get many options, just the one shrink wrapped, jewel case, 2-panel insert, traycard and CD printing. Also, to save on proofing costs and streamline their process, you have to submit your master with artwork through their custom-made software (Window only).

As a trade-off for the lack of options, you get a quality product at very inexpensive prices. For up to 10 CD’s, it is $1 per unit. After that their prices varies from 0.75 to 1.75, depending on their current demand. For advanced users, It is also nice that they provide a full set of API’s to interface with their service, making it easy to integrate CD sales with custom shopping carts or other solutions, if you are a beginner in music check in for a Free Music Lesson online. Additionally, they will provide you with a UPC barcode for free if you don’t have one. Other places like CDBaby charges $20 for one if you want to distribute your CD to online music services.

Hands down, I believe Kunaki perfectly suits the needs for the hobbyist music publisher such as myself with ZERO upright investment. 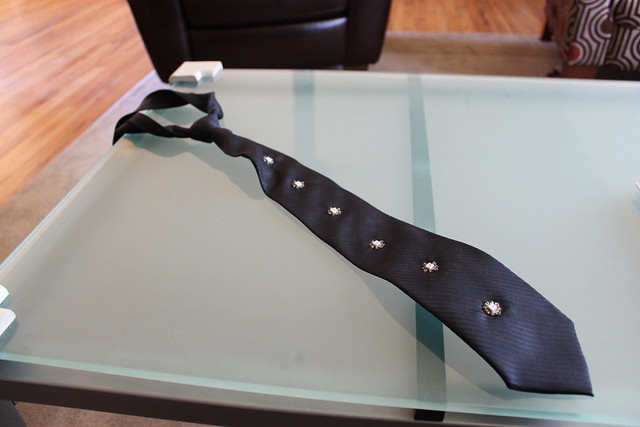 A necktie with NeoPixels sewed into it with conductive thread. Powered by Pinoccio

Internet connected wearable devices are getting more and more common these days. There are many devices available off-the-shelf right now, but there is something special about being able to imagine and create your own. To accomplish this, I truly think the best platform right now is to use a Pinoccio.

END_OF_DOCUMENT_TOKEN_TO_BE_REPLACED

Just wanted to share this pic I took at our last show. A Schizopolitans show is this times 4. We all have way too many buttons to push, cables to connect and knobs to turn. For all of us, juggling through all this stuff usually make the shows a little extra interesting I finally got around to finishing the hack to my Gakken SX-150 mini synth. On the first part I added the ability to be controlled by Arduino through a virtual software midi port. On this iteration, I added a real midi in port and I also added a 1/4′ plug audio out, to make it more usable with standard audio equipment. For more picture you can take a look at the flickr set. The MIDI part consisted in combining the Arduino MIDI IN circuit and the Voltage Control Circuit described on the first part of this hack.
And, this is how it sounds!

Is your dream drum teacher on the other side of the country? No problem. Now, you can meet your teacher online on your smartphone or using a webcam on your computer.

No matter where you live, chances are we can introduce you to an amazing drum teacher in your neighborhood, including children’s drum lessons. You can take lessons in the privacy of your own home or at your teacher’s location.

It seems that during February, other than my super favorite FAWM, there are plenty of other interesting things going on, that have the same “goal oriented” objective. Well, for one, there is the RPM Challenge, where you also do music, but you have to actually turn in a CD at the end of the month.
But, I just discovered this other one, Thing-a-day, where you pretty much pick your poison, do something everyday and document it. This also sounds pretty interesting, specially because some people are able to exploit their creativity, without being framed by a format or activity.
Case in point, (pretty awesome btw), this guy made one instrument a day for the month of February.

Ranjit’s A Hand-made instrument a day It has been a couple of months since it has been released, but I never did the shameless plug in here so here it goes:
I have gathered the outcome of my FAWM 2008 participation and put it on a nice CD format and it is available for sale through CD baby. So… if you are feeling adventurous, why not buy it? is cheap!

Here are a couple of full tracks, for your enjoyment.

Also, for more music, my myspace page is http://myspace.com/nextdoorninja

The Gakken SX-150 is a really inexpensive analog synth (about $50, now available at the make store). This synth is included on a Japanese magazine (I wouldn’t expect less from them) so that makes it 2*2 times as cool.

Since its release, someone already has created a module to add midi support to it using the atmel attiny2313, but I’ve wanted to use an Arduino board to do it, to keep things easy to prototype and hack.

My implementation uses a single DAC IC chip, the MCP4921, which sells for about 2 bucks from Mouser. The current version uses the Arduino, only to read one byte, as a midi note, from the serial connection and sends that to the SX-150. I could have created the full midi circuit to make it a standalone solution, but that increases the cost and complexity of the physical connections. I’ll probably do that on a later revision.

So, in order to receive midi data, I wrote a small Processing sketch that receives midi, and sends the note information through the serial port to the Arduino. The flow of data from the sequencer to the synth looks like this:
Ableton Live => Virtual Midi Connection => Processing Sketch => Serial Port =≶ Arduino => DAC => SX-150

And finally, the source code:

Now, hook it up and make some noise!

FAWM (February Album Writing Month) is a yearly community challenge to write 14 songs (a complete album) in February. 14 songs, that’s a song every 2 days, at least. This is the perfect excuse for me to produce stuff, no matter if it is good or bad. Here’s what I’ve done so far (this list will get update as February goes along.)